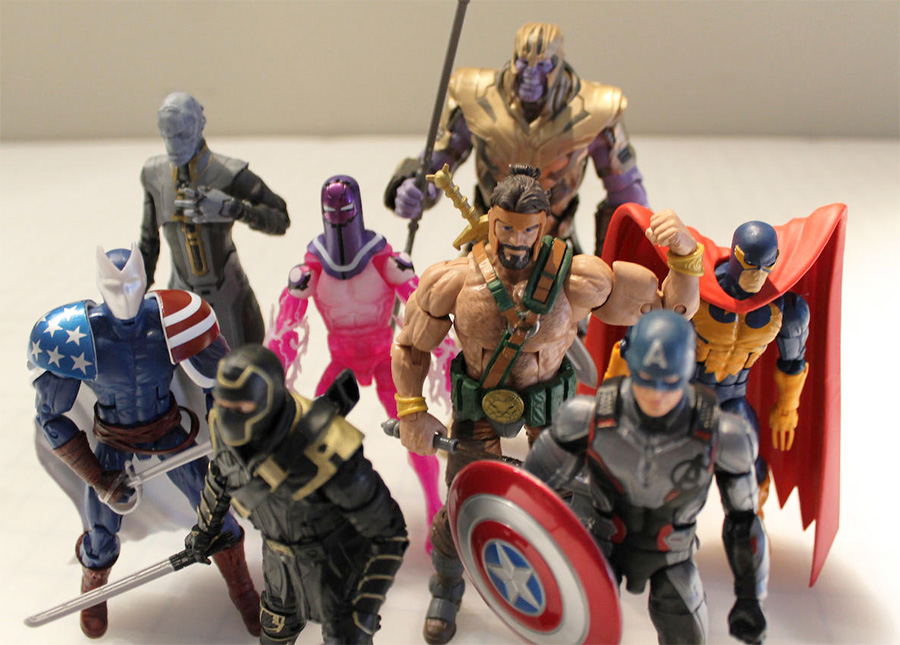 This is an action figure line based on the Marvel Comics characters. The line featured Marvel action figures in 6” scales which were initially produced by Toy Biz and then Hasbro.

Toy Biz’s Marvel Legends series came with a clamshell packaging and included a comic book. The first series was comprised of The Hulk, Captain America, Iron Man and the Toad’s action figures.

When Hasbro took over the production in January 1, 2007, they renamed the line to Marvel toys and a comic book was no longer included in the package.

Marvel Zombies action figure line is a supporting merchandise based on the 5-issue limited comic series of the same title released by Marvel Comics. Diamond Select Toys and Collectibles produced the action figures along with a number of mini busts under the Marvel Zombie Minimates line.

Classic Marvel action figures are featured in The Classic Marvel Figurine Collection. The line is composed of highly detailed and artistically sculpted figurines of all Marvels’ greatest characters.

Each classic figurine is hand painted and sculpted in lead. A classic Marvel figurine is stamped with an individual number and is stored in its own collector’s box.

• Peter Parker, Spiderman action figure – a very much ordinary man who was given great power and responsibility. Spider Man action figures first came out in the 1960’s and since then became a classic piece to any action figure collection.

• Bruce Banner, The Incredible Hulk action figure – emerged when Banner was accidentally exposed to the blast of a test detonation of a gamma bomb. The Hulk figure is characterized as a green raging, humanoid monster and giant. Wizard magazine hailed The Hulk as the 7th greatest Marvel comics’ character.

• Steve Rogers, Captain America action figure – he stands for the American values of truth, justice and liberty. He is characterized by his outfit bearing the colors and design of the American flag. Captain America’s figure is also best symbolized by the shield he carries.

• Norman Osborn, Green Goblin action figure – he is among Spiderman’s most perpetual enemy who is best remembered for killing Gwen Stacy (Peter Parker’s girlfriend). The Green Goblin was ranked by IGN as the 13th Greatest Comic Book Villain of All Time in 2009.

How to buy Marvel action figures?

1. Decide on what Marvel action figure to buy. You can acquire the figures of your favorite Marvel characters or you can get the ones that are still not in your collection.

2. Before making a purchase, thoroughly check the condition of the Marvel figure. Look for any signs of wear and tear that can influence its price and value.

3. Know your Marvel action figure seller. Make sure to purchase only from trusted sellers with a positive feedback and reputation and one that is clear with his or her policies and the terms and condition of your purchase.

Where to buy Marvel action figures?