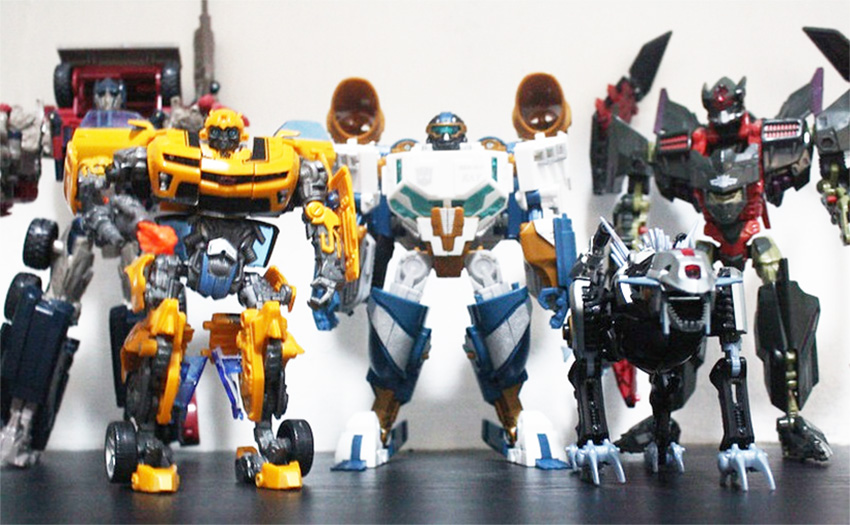 Transformers are a popular Hasbro toy line of the famous alien robots who can transform into vehicles into other forms thus it is named.

Transformers figurines conquered several franchises such as the comics, tv and movie industry.

With the primary success of the animated series and the film, Transformers rocketed to fame, influencing the action figures that cradled it higher to prominence.

Take into account that you have to purchase original transformer action figures if you want to boost your collection. Beware of the Gobot figures, a competing toy company that features similar “robots transforming into cars” theme.

One way to recognize a Gobot from a Transformer is a symbol of either the Autobot or Decepticon on the action figure.

If you’re aiming for a complete collection, follow the Transformers figurines timeline. From there, determine which action figure is highly regarded in a particular year, in a movie or in an animated series and then try to acquire one.

Vintage Transformers figurines are essential items in your collection and make sure to have one for added value.

Owning an action figure collection does not stop in purchasing and collecting, of course, you would need to maintain it if you want later profit to happen. Make sure to properly clean and store your figures to maintain mint condition.

2. Megatron – the leader of the Decepticons is just as iconic as Optimus Prime. His arm-mounted cannon weapon is also what he transforms into.

3. Devastator – he is considered as the 1st “combiner” toy and is a combined form of 6 Constructicons. The Constructicons can be collected individually or acquire the whole set.

5. Fortress Maximus – is simply a massive figure. He is the single largest transformer action figure from Generation 1 and is also the most expensive.

Revenge of the Fallen (ROTF) Transformers figures based on the new movie of the same title, has also joined the ranks of the top sellers among the Transformers action figures. These robots come in a variety of size and levels of complexity. Some can transform into simple or very much more complicated forms.

Transformer action figures that were released in the 1st wave or the Generation 1 figures are now sought after by devoted fans. These vintage Transformers figurines are perfect additions to your action figures collection or even for starters who wants to boost their collections.

Prominent figures of Megatron and Optimus Prime which are included in the very first release of Transformers action figures are surely one of the priced vintage figures you sure don’t want to miss.

Always remember that only original Transformers action figures can account to the worth of your collection. Make sure to only buy Transformers figurines that are manufactured and distributed by licensed toy companies.

When you purchase a classic Transformers figure that is no longer in its original packaging, check the movable parts and make sure that the joints are durable and the pieces are original.

Bear in mind that the popularity of the character increases the value of that particular action figure.

The rarer the Transformer figurine you have, the greater its value. But once again it also depends on its mint condition and the completion of the accessories that goes with the original package.

The Transformers toy line was originally created by a Japanese toy company Takara Tomy in which they were branded to as Diaclone and Microman. Hasbro bought the distribution rights in 1984 and was the one to label the line Transformers.

Transformers action figures popularity rose amazingly quick in which the fervor of collecting them continues up to this day. This timeline will be a great help for serious Transformers figures collectors who wants to a complete collection.

Below is a toy line on Transformers action figures:

• 1984 (Generation 1) – Hasbro launched the Transformers toy line of the Autobots and the Decepticons. The original set was composed of 21 figures including Optimus Prime, Bumblebeee, Jazz, Megatron, Soundwave and Starscream.

• 1985 – the 2nd release of Hasbro’s transformers line was highlighted by the introduction of Dinobots and Constructicons.

• 1986 – “Transformers: The Movie”, an animated feature film was released in theaters, featuring many of the transformers characters in which the new toys were modeled after.

• 1987 – Hasbro introduced the figures of the Headmaster and the Targetmasters and also Fortress Maximus, the largest Transformers figure at that time that stands 2 feet tall.

• 1988 – Hasbro released 2 new toy lines: the Powermasters and the Pretenders (robots that disguise themselves inside a shell). Micromasters (small vehicles that transforms into robots) were also introduced along with Sparkabots, Triggerbots, Beast and Vehicle Pretenders, Firecons, and Seacons.

• 1989 – the Transformers fan’s favorite characters were reintroduced back into the toy line, Bumblebee, Jazz, Grimlock and Starscream.

• 1990 (End of Generation 1) –Hasbro released Transformers Action Master, action figure versions of both classic and interesting new characters that don’t change modes and forms however they have vehicles and partners that does.

• 1992 – 1999 (Generation 2) – Hasbro re-released many of the popular Transformers figures from early years with new paint jobs and different weapons and accessories.

The Transformers animated series too was re-released capitalizing on the all-new CGI graphics technology.

The action figures in the line were very detailed making it a great success that lasted to 6 years. It was regarded as the most flourishing franchise of the Transformers with of course the exception of the originals.

• 2002 – Hasbro launched the Transformers Armada toy line which features Minicons that can connect to larger figures enabling a new feature.

• 2003 – Present – classic Transformers action figures made a major came back in high detail under the Transformers Alternators line. Also released were the 20th Anniversary figure of Optimus Prime and Transformers: Energon with Unicorn figure that transforms from a robot onto a planet.