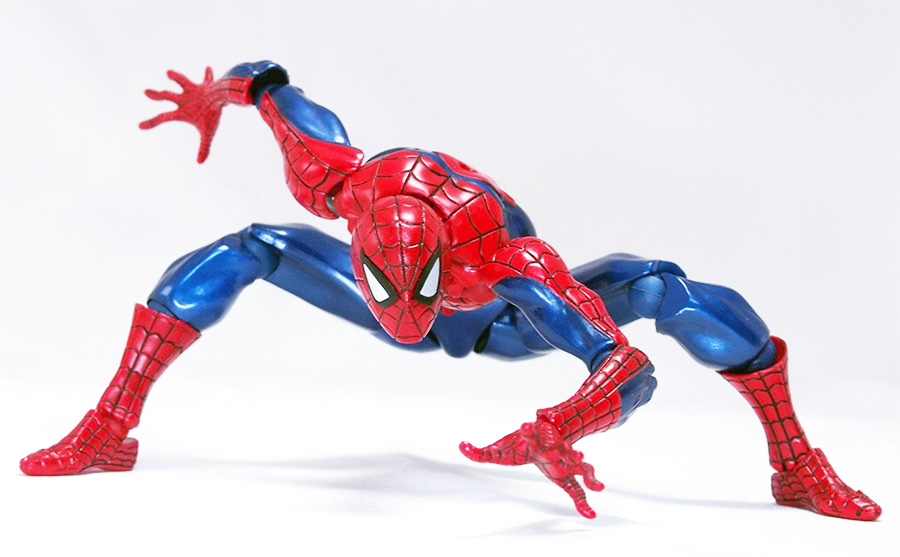 Are you collecting Spiderman action figures? Or you already have one collection that you want to improve?

Here is an informative guide to start and update your Spiderman figurines collection. Learn all necessary info such as knowing the top Spider-man figures, collecting tips and Spiderman figure buying guide.

Spiderman started off as a comic book character that hit the market in 1963. He was an instant click and his popularity led to an animated series in 1967. A year after its release, collectible Spiderman action figures graced the store shelves.

The earliest version of a Spiderman figure was not an action figure at all. Rather, it was a Spiderman costume and accessory pack made to fit Captain Action, popular 1960’s action figure who can be transformed into different characters with the use of different accessories.

1970’s Spiderman action figures – in 1970, an 8-inch Spiderman figure was released by Mego Toy Company. The figure was made of plastic, had a cloth costume with moveable arms and legs.

The Secret Wars action figure had a basic design, moveable legs and arms and also came in a black suit. It is one the prized action figures until today.

• Spiderman Classics – ToyBiz’s line of Spider-man action figures, his allies and enemies. The line had more or less 15 series: Series One debuted in 2001.

1.) Subtitled with Classics – consists of 2 waves with clamshell packaging associated with Marvel Legends. It begun in 2001 and includes reprint comic books issues related to the character.

2.) Simply labeled Spider-Man – the second line is packed as Spider-Man and the website, titled Spider-Man Classic (take note of the singular form). It was restarted in 2003 with a new series 1, had a cardboard packaging with no comic books included.

Figures under the Spiderman classic action figure line had more points of articulation than the Classics such as: lateral slides and pull outs, individualized fingers, and torso hinges.

Marvel Legends Spiderman action figures – a number of Spiderman’s classic villains have been released under Toy Biz’s related Marvel Legends banner. The figures had the same scale and general style.

• Captain Action was an Ideal Toy’s action figure popular in the 1960s. The figure was designed to be a generic and with the help of various costumes and accessories that can instantly turn him into any character.

In 1967, Ideal released the Captain Action Spider-Man set, complete with costume and other crime fighting accessories, including a yellow plastic spider.

This figure is one of the most valuable action figures in toy history, with reports of one mint-condition piece selling at an auction for $20,000.

• An 8” figure which boasts of Mego’s signature articulation and classic sewn-cloth costume. This particular figure was a fan’s favorite and an essential addition to any Spiderman action figure pile, even a staple to an action figure collection in general.

• From Mego’s Pocket Super Heroes line of 3 ¾” action figures. But despite releasing big name characters such as Spiderman, it received only moderate success due to the Star Wars action figures then booming success.

Today, Pocket Super Heroes Spider-Man action figures are highly sought after by collectors as it will always retain its title as the very first 3 ¾” Spider-Man figurines.

Spider-Man Secret Wars action figure do not possess the best standards, it had minimal articulation, a poorly re-used body sculpt, and no accessories. Even with its imperfections, this figure is considered a highly prized piece by most Spider-man figures collectors.

• Released by Toy Biz, the new Spiderman action figure had poor sculpting and possessed one of the most impractical features in the history of action figures, suction cups.

They were permanently glued to the palms of the figure’s hands: a clear attempt to mimic the wall-crawler’s signature sticking ability.

But no matter how laughable the figure’s form maybe, collectors are still compelled to acquire them.

Spiderman’s popularity brought the frenzy of collecting his action figures as well as the figures of both his allies and enemies.

In starting your collection, first familiarize the various Spiderman characters. Pick the ones that appeal to you most.

If you want to complete your collection, acquire the rest of the character’s figures. You have to consider the various waves and different toy lines as well as the toy company that released the figures. Refer to a reliable Spiderman action figure’s checklist to do so.

Boost the value of your Spider-Man figures collection by adding vintage Spiderman figurines. These classic figures are worth more as they are no longer in production and are highly sought after by fans and collectors.

– When you buy you Spiderman figurine, examine its condition thoroughly. Check for any existing defects: broken parts, paint chips, discoloration, and any wear and tear in the figure as this greatly affects its value.

Other places and venues to acquire Spider-man figurines include malls, collectible shops, yard sales, specialty stores, and many others.

– Taking proper care of your Spider-man figures preserve its value. You may do this for later profit or by simply wanting your figures to stay in their best collectible conditions.

– Keep your Spiderman action figures away from the harmful effects of sunlight, heat, and humidity. Store them in tightly sealed containers, clean the figures once in a while to avoid dust and grime buildup.