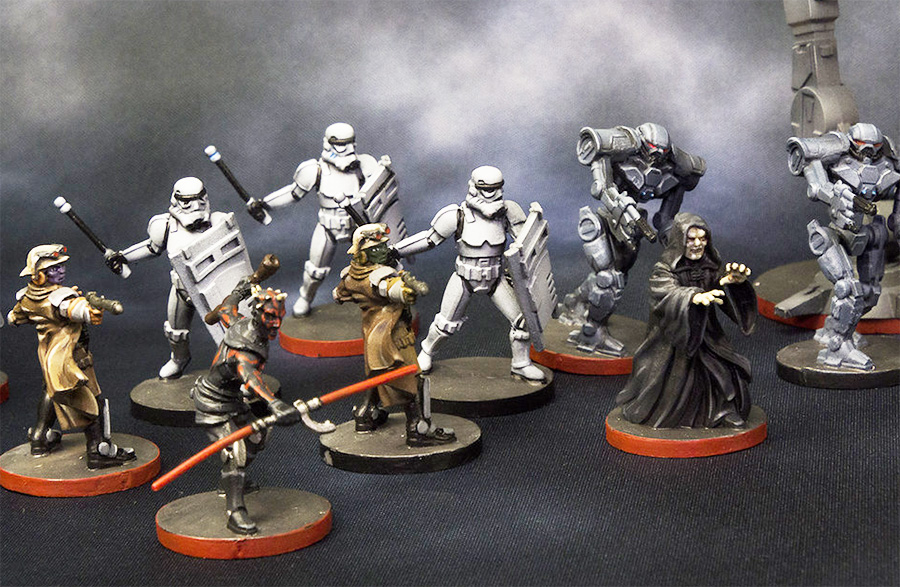 Join in the fun of playing star wars miniatures. Collect and stage your very own star wars battles with these collectible mini figures

Star wars has managed to keep the fire burning by continuously producing variety after variety of star wars figurines. Thus collectors craze after them and now a table top game captures the fans; craving for more as star wars miniatures includes some of the rarest star wars action figures.

Star wars miniatures were formerly produced by a company called West End Games in 1989. Along with an RPG game, the star wars battle rules was set strictly so it coincides with both the role playing and table top game.

In 1999, the company declared bankruptcy cutting off the production of both the miniature and the RPG. The following year, Wizards of the Coast picked up the Star wars RPG license and released a limited metal 30mm miniature to match the line.

Wizards of the Coast or can be referred to as WotC or simply Wizards, they produced the metal minis until 2001 till the line was cancelled. They resumed production in September 3, 2004 which premiered the new star wars miniatures line of plastic 30mm figures.

WotC is a subsidiary of Hasbro since 1999 which happens to be the manufacturer of star wars action figures.

The star wars saga continues as Wizards brings in another addition to the star wars merchandise. The company is an American publisher of games basing on the themes of fantasy and science fiction. And because of this preference for this kind of genre, there would be no denying that star wars more than qualifies to be made a version as well.

The line of the star wars miniatures features hundreds of ready to play miniatures such as heroes, droids, aliens, villains and creatures of all descriptions.

What is a star wars miniature?

Star wars mini represents a variety of star wars characters. There are rebels, jedi and aliens of all sorts. The miniature has a scale of 34mm and their sizes range from small to large and all of which is individually fully assembled and painted.

Collectors sought after these collectibles due to the level of rarity of each star wars mini figure which could be common, uncommon, rare and very rare. The underside of the star wars mini houses information on the character rarity, set, and the characters unique number on the set.

Each star wars miniature comes with a two-sided stat card. One side has the characters combat description; strengths, weaknesses, force powers and special abilities. The other side of the stat card contains the sketch of the character that was used to create the miniature.

The game mechanics is a simplified version of the RPG counterpart.

Several scenarios, multiple maps and set themes from different settings and time periods from within the Star wars universe are available.

The games objective may vary. However, in standard play the player who earns the most amounts of victory points equal to or greater than the squad limit wins as long as his or her character made no offensive moves within 10 rounds.

Players score victory points equal to the cost of the characters they defeat.

To play star wars miniature, each player must build point-based squad from one of ten different in-universe factions. Players will then conduct a battle between their squads.

The game requires that each player picks one faction to play and build a squad using the miniatures from the chosen faction. Fringe, however is an exception. Being a neutral faction, its figures can be used in any squad.

Play rotates clockwise around the table starting from whoever is the first player. The player with the highest initiative check result chooses who goes first in the round.

All damage and hit points are measured in multiples of 10. Force ratings are given to some characters, this is the number of points they spend to use force powers, re-roll bad rolls or move faster.

A star wars mini character can stand still without making any attacks or using any special abilities. It doesn’t matter which direction your miniatures is facing, all characters can equally see, react and fight in all directions.

The characters can only squeeze either in between magenta or orange lines which happen to be walls and pits, or could be both.

There are no range attacks. It doesn’t matter whether the miniature is adjacent to the target. However, there is no range limit for attacks; you are only required to have a line of sight to a legal target.

It was intentionally devised to left out range limits and modifiers so that the star wars miniature game can be kept quick to play and easy to learn.

Extra attacks – a character can make its attack at different enemies. Double and Triple attacks can only be used if the character attacks normally on its turn. Other special abilities cannot be used on a turn when other ability has been used to replace the attack.

Attacks of Opportunity – can be performed if an enemy leaves an adjacent square even if it is moving into another adjacent square. Before resolving an attack of opportunity, a destination square has to be chosen first.

Cover grants a star wars miniature a flat +4 bonus to its defense regardless of the number of terrain features or characters that grants cover to the target. If any part of the large character is in or behind a square containing low objects, it gains the benefit of cover. You are allowed to count low objects and pits only if the distance has to do with movement.

One unique feature that separates star wars miniatures from other table top game is the use of “Force power”. They are found in the miniatures of jedi, sith and other force users.

A character’s force point can be spend solely on that character, however, some star wars mini’s force power, special ability allows other characters to spend their respective force points. Specific card rules text will be stated in cases like this.

Some characters can spend their force points on multiple instances of the same effect. Also, there are force powers that can replace attacks and cannot be used more than once in a turn even if a character can spend multiple force points in his or her turn.

Special abilities may vary from the each character. This or the force power may replace attacks and can be once again used only during a character’s turn.

Special ability must be declared in advance.

A star wars miniature map was created and designed by Christopher Preksta. It is a collection of custom battle grid maps for the use of the star wars RPG and table top games by Wizards of the Coast.

There are several maps representing different locations from the star wars universe. Once the players were able to agree on a point total and play format and build their squads, a map is chosen and set up.

The star wars miniature map features a one-inch square grid overlay. This indicates where the characters can move, determine range and be able to see its legal target.

Here is list of some of the official star wars miniature maps:

• Starship (Revenge of the Sith Starter)

Hideout of the notorious gangster, Jabba the Hutt, is complete with droid torture room and the rancor pit. Huge sized figures can access 75% of the map.

Able to connect with the Wizard’s Coast Endor Bunker map featured in the Attack on Endor which is set for a large scale battle. The Ewok Village walkways is hidden amongst the towering Endor forest which makes clear shot difficult.

Able to connect with WotC’s Coast Hoth maps included with the AT-AT Scenario pack. This is the Rebels hidden base in the snowy Hoth system.

Able to connect with the Wizard’s of the Coast Mos Eisley map in Ultimate Missions: Rebel Storm. This is designed for RPG games and features the Millennium Falcon.

Able to connect with the Wizard’s of the Coast Mos Eisley map found in Ultimate Missions: Rebel Storm. Unlike the former Dock Bay, this map is without the Millennium Falcon and is also designed for role playing scenarios.

The clone wars miniatures is Wizards of the Coast’s latest addition to its popular Star wars gaming and collectible miniatures series. There are 40 mini figures are available.

Star wars miniatures: The Clone Wars set was released November 4, 2008 and was based on the movie Star Wars: The Clone Wars. It is the latest expansion of the miniatures that features both new and familiar characters from the film.

Like all other star wars miniatures, the clone wars mini are in pre-painted plastic with a double-sided stat card and can be used to play skirmish-level or mass-battle combat scenarios.

For collectors, the basics of star wars clone wars collecting or in this case star wars miniatures the clone wars, requires the use of a checklist.

This comprehensive collection of Just like the other star wars miniatures their rarity are denoted as common, uncommon, rare and very rare.

Thirteen sets of star wars miniatures are out in the market and 3 more are scheduled for future release. Each of the first ten sets contains sixty figures of varying rarity. Upon the release of the clone wars, the sets only contained 40 star wars figures.

– an expansion for the Star Wars Miniatures role playing game.
– Released on January 15, 2008
– featuring hard stock Map tiles for custom us and the tiles have several types of terrain for use in the game.

– colloquially known as the AT-AT
– is a unique standalone Star Wars Miniature and was officially released on November 11, 2005
– Limited edition figure and is currently no longer in production

– A scenario expression set and is a Target Exclusive released on December 2007
– Set includes 17 miniatures:

– released in November 2008
– is a non-random expansion set for the Star Wars Miniatures game and was sold exclusively at Target stores.
– Contains: a rules booklet and 2-sided battle map.