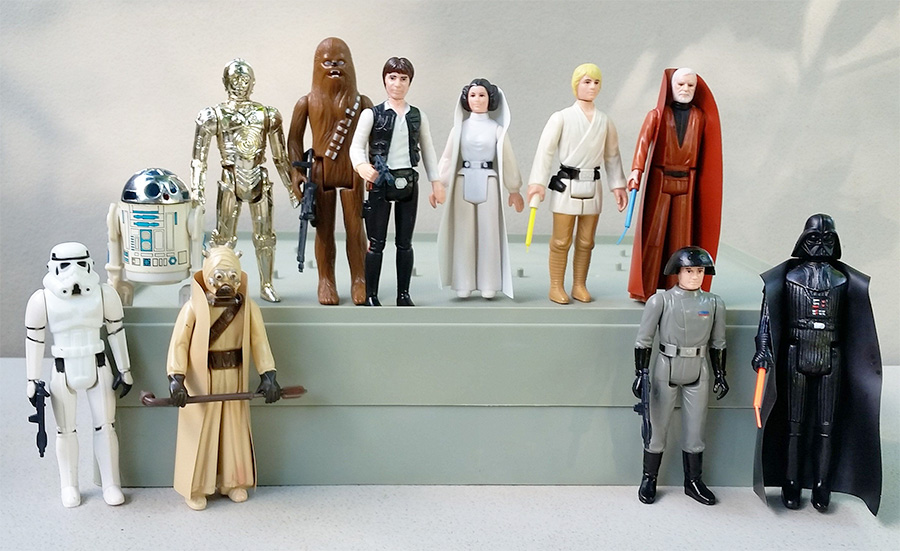 Who hasn’t heard of Star Wars? I sure did, and so do most of us. Kids and kids at heart alike never pass a chance to watch another star wars film or grab a hold of them awesome action figures and collectibles.

Star wars is a media franchise that depicts an epic speculative fiction film set mainly in space. It is both a melodramatic adventure and a fast-paced battle motion picture.

Initially created by George Lucas, the first film on the franchise was released by 20th Century Fox on May 25, 1977 with a budget of $11,000,000. It is the third-highest-grossing film series. The film’s theme relates to archetypes of the fantasy genre. It presents characters such as knights (Jedi), princesses and other royalties, aliens, droids, and witches.

Unlike the often opted futuristic and lustrous backdrop for a sci-fi film, star wars was dirty and forbidding. This was Lucas’ vision for a used universe which current horror films have adapted.

His effort for the film’s success started early in May 1973. His work unsurprisingly was not wasted, at the time of its release on 1977, the first star wars movie, Star Wars Episode IV: A New Hope originally released simply as Star Wars, earned $460 million in the United States alone and bagged $337 million overseas.

With the film’s massive accomplishment, a vast variety of merchandise has been built to support its popularity. Star wars enthusiast begun collecting memorabilia as a way to revere espouse on the film.

In 1977, during star wars first hit as an epic space opera, Kenner Toys received the first license to manufacture star wars action figures. They depicted several characters from the film which promoted an entire line of toys.

The term “action figure” was coined by Hasbro in 1964, the second toy company to manufacture and produce the star wars toys. Sometimes referred to as an action doll, they are figurine replicas of famous characters from a movie, video game or a comic book.

Action figures are more popular among boys. They are often marketed as toys but it has been accepted and widely circulated as an adult collector item.

There was a trouble in Kenner’s production which put off the figurines release in the Christmas of that same year. “Early Bird Certificates” were then issued, allowing the purchasers to pick the first 4 figures upon circulation. In 1978, Kenner was able to sell 42,322,500 action figures. Kenner’s line continued from 1978 until 1985.

One unique feature of the Kenner’s star wars figure packaging is a back card that promotes other action figures on sale.

In the first year of their production, a 12-back card was marketed, 12 action figures were advertised.

Forty seven varieties of three-inched action figures from Kenner’s Star Wars line consisting 80 toys. Each retailed for $2 and $4 each toping the sales chart for selling 200 million figures. 50 million were also sold in the star wars play set which priced at $25 and up.

Hasbro toys bought Kenner in 1991 and produced a new line of star wars toys and named it “Power of the Force” in the summer of 1995. The new line featured more muscular characters. By the time star wars re-released the trilogy in 1997, Hasbro created star wars figurines to concur with the three prequels released from 1999 to 2005.

Hasbro issued green cards that contain holographic foil stickers that were place on top of the character photo on the package. This is to celebrate the 20th anniversary of the release of Star Wars.

The green card was the former card back in which they changed, featuring a green stripe, as to which it was called. Also in 1997, LucasFilm officially go into cyberspace and launched StarWars.com in February.

This is a timeline of Hasbro’s Star wars figure collection line form 1998 to 2008:

1998 – Freeze Frame line, instead of a green card, a freeze frame is replaced in the character photo. The frame displays a scene from the one of the star wars movie featuring the figures character.

1998 (late) – Flashback Figure line, a convertible picture in a small frame would show another character picture from the original trilogy and then with a pull of tab, a picture from Episode 1. The line lasted from 1999 to 2000.

1999 – Commtech figures, these star wars figures come with a stand and a voice chip that quotes lines that the figure’s character has said when a device is waved over it.

2008 – The Legacy Collection lineSeveral star wars figurines were manufactured in the span of the films success. Many of which are priced higher than normal toys, but because of star wars reputation, the action figures became an essential hunt for collectors.

The collection of star wars figures and other memorabilia is not limited to a specific age limit. In its worldwide invasion, it captured serious collectors to consider their worth, not only as a film but a growing industry in the field of collection.

Young and old alike can attest to the addiction brought about by the star wars film phenomena that dominated the big screen and influenced the toy making industry.

Among all star wars collectibles, the action figures or the “toys” are the most sought after. For one reason, it looks beautifully on display, plus the fact that because they are toys, a wider range of spectators can appreciate them including the children.

The first four action figurines to be released were Luke Skywalkwer, Princess Leia Organa, Chewbacca and R2-D2. These are also four of the main characters in star wars and being such, added popularity and appeal to their star wars miniature.

The demand for the star wars toys continued to intensify through 1983. But as of 1985, the momentum slowed. The interest of the collectors dwindled for quite some time until it scored again upon the arrival of “Power of the force 2” line of action figures in 1995.

A new wave of star wars figures are released by Hasbro. Their new toys are mainly based on the Star wars: The clone wars. A main attraction is the new version of the Falcon, it holds 18 star wars action figures with superb features such as built in movie quotes and flashing lights. New and improved versions of the action figures are also being released.

In September 3, 2004, the star wars miniature premiered, releasing eight sets of collectible miniature star wars figurines. The action figures are used in a game of building point-based squads that battles the opposing battalion.

Star wars collectors opt to acquire them because the game set includes miniatures that if not rare are very rare indeed.

For more details, consult the complete Star wars action figures checklist & database: You will find there all the collectible Star wars figures since the first Star wars movie was released.