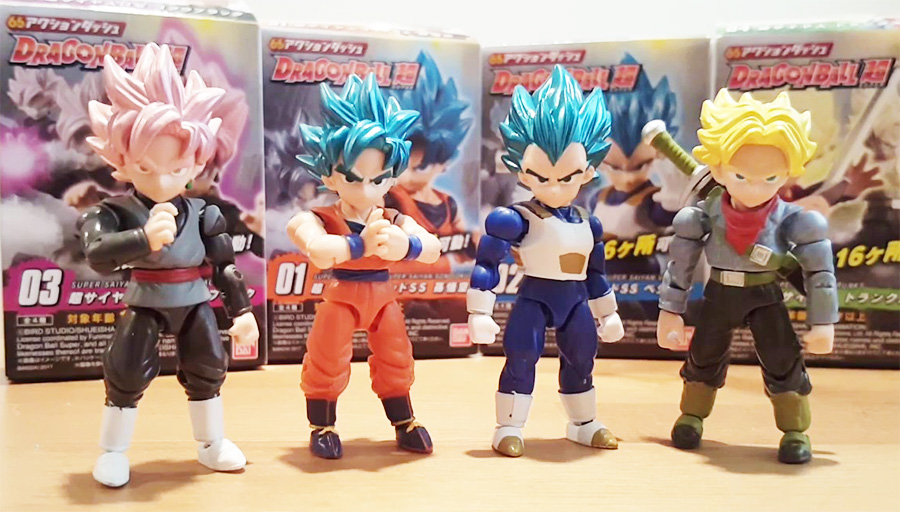 It was originally serialized in Weekly Shonen Jump (weekly manga marketed to a male audience of ages 10 – 18) from 1984 through 1995. 519 individual chapters were published into 42 Tankobon (indepenly appearing book) volumes.

Dragon ball was inspired by the Chinese folk novel Journey to the West. The series mainly follows the adventures of Son Goku, starting from his childhood into his middle age years where he begins his martial arts training.

It was also in that stage that he starts to explore the world in search of the 7 whimsical “Dragon Balls” that once brought together can summon a wish-granting dragon.

Along Goku’s trip he meets friends and foes who too seek the Dragon Balls.

The 42 tankobon was adapted into adapted into 3 anime dragonball sagas, Dragon Ball, Dragon Ball Z and Dragon Ball GT all of which was produced by Toei Animation. The series went through several adaptations and was dubbed and aired in quite a few countries.

20th Century Fox began the production of the first American-made live action Dragon ball movie in 2002; the film was released on April 10, 2009.

Dragon Ball became of the most popular manga series in Japan and North America enjoying a high readership rate with over 150 million volumes of series sold by 2007.

Manga artists and developers did claim inspiration from dragon ball for the equally popular works of Naruto, where Naruto figurines are based from and also One Piece.

Because of the manga and the series’ popularity, several toy companies started building merchandise around Dragon ball. These companies include Irwin Toys, Jakks Pacific as well as BanDai.

Dragon ball did not only inspired the creation of the action figures but also rouse the demand for other collectibles including coloring sheets, costumes , posters, other fan arts and many more. Dragon ball z action figures therefore were labeled “hot sellers” in Nov. 27, 1999.

Irwins Toys’ Dragon ball z toy line placed a strong sale in the toy market in August 6, 2000. DBZ was once again marked as a must have action figure, vehicles and play set.

The manga also influenced the conception of dragon ball trading cards and online games. However, the manga, tv series, DVD’s, movies and other visual representations remains its biggest ticket to fame.

Along with all the three sub series of dragon ball, dragonball z is most demanded. DBZ toys skyrocketed worldwide as the popular Japanese anime manga has reached great heights.

The plot of dragon ball z picks up exactly where the previous series left off. It was so named to differentiate from the previous saga. The transition was attractive as it follows several year gaps from dragon ball and also features revised origin stories of some lead characters and introduces new ones.

Because of the stories appealing chronicle, fans soon were charmed to collect dragon ball z action figures. Jakks Pacific and some other toy companies are more than willing to release the dbz figurines.

Not only did dragon ball z succeeded in its animated tv series and movie but the toys also became a hit to fans all over the world. The sci-fi theme appeals to all caste of crowd. The action packed premise brings about a rush that reflects positively to dbz action figure collecting.

Due to dragon ball’s successful manga comic, toy companies were instinctively inspired to develop action figures. Collecting dbz action figures signifies the fans support to the anime manga as well as the tv series and to the film.

Like any other form of collecting, it requires proper knowledge and of course passion. Most of all, what’s important is that you enjoy what you’re doing and your collection gives you a sense of satisfaction.

In collecting DBZ figurines, a primary tip is to familiarize both the lead and the adversary characters. Knowing and learning dragon ball z characters names as well as their disposition in the manga and tv series will prevent accidental picking and collecting of unfavorable and detested dragon ball characters.

This may not be a vital matter for serious collectors who would want a complete collection but considering the kids who simply want to have the good guys, this will be preferred.

Next is to identify the authentic dragon ball z toys. Choose the ones that were produced by licensed toy companies. Early DBZ toy collection was licensed to Irwin toys while the new ones are from Jakks Pacific. The third world’s largest toy manufacturer from Japan, BanDai, also produces DBZ action figures.

Lastly, look through local comic book stores; you might stumble upon new or used dragon ball toy on sale or other collectors might want to trade.

For other unique additions to your dragon ball z collection, hunt for limited edition or hard to find dbz toys.

Dragonball gt quickly followed the completion of dragon ball z being the third and final dragon ball series. DBGT is a completely new plot, it is no longer based on on Akiro’s dragon ball manga.

The reintroduction of the original humorous dragon ball series was injected into it rather than the action packed dbz to once again capture the fans interest. However, dbgt was unsuccessful; it no longer spawned theatrical films unlike the previous two.

Because of the poor response from the dragon ball fans, dragon ball gt merchandise was also affected, from products such as video games and the action figures.

Its manga may not be catchy but several years from now, its figures will earn distinct recognition because of it. In collecting, there is no really opting for what are collected most, the pride lies in your erratic additions.

Dragonball z evolution action figures were based on the animated movie of the same name released on April 2009.

Like all the other major sci-fi flicks, fans would not let it pass without acquiring the figures of their favorite dbz characters such as Goku, Bulma, Krillin, Piccolo, Gohan, Vegeta, Trunks, Frieza, Cell, Majin Buu, and many others.

The task of fulfilling the fans dbz collecting craze went to toy giant, BanDai. The company did not disappoint the fans by producing high action packed figurines with awesome features.

Dbz evolution toys ooze with realism in sculpts and paint applications. The action figures are more stylized than the characters that appeared in the movie but more realistic than their cartoon counterparts.

There is however a downside to the dragon ball z evolution action figures which is their lack of articulation. They only have three total points and the 2 are immediately consumed by their “fast action” feature.

As mentioned earlier, dragon ball z action figures expanded several toy lines because of its demand. Here are some dbz toys varieties that are most common to dbz fans and collectors.

Dragon ball fast acting figures – articulated fast dbz action figures scaled at 6” and comes with a 7” rip cord that is used to activate the fast kicking or punching action feature.

These figures come with 9 points of articulation with a bonus feature that includes one part of the dragon Shenron in the pack. Collect all figures to complete Shenron.

2.5” Flash changer – scaled at 2.5”, these dbz figures also comes with a colorful ornament display changer. The changer can be removed from the action figures and the stand and be separately displayed or can be placed inside the figure to display in super saiyan mode.