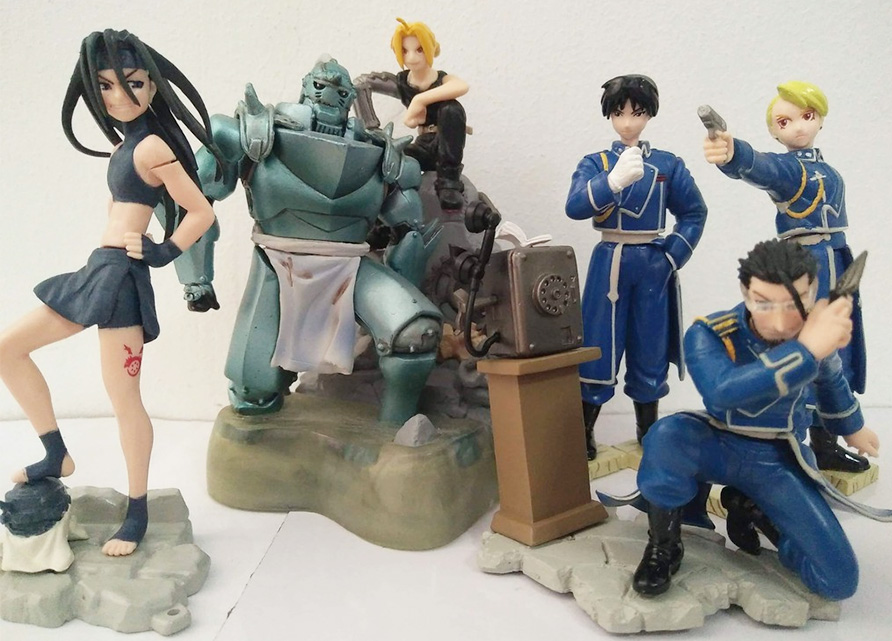 Inspired by the beautiful artwork of Japan’s cartoons; from manga to anime shows to video games and other media, Japanese anime figures has established itself prominently in the collectibles market, making them a must addition to your action figures collection.

Below is a list of the top classic Japanese anime figures based on their equally popular video game, manga, and anime series (in random order):

Based on the Japanese manga series by Tsugumi Ohba (writer) and Takeshi Obata (manga artist). It centers on Light Yagami’s discovery of the Death Note, a supernatural notebook dropped to earth by shinigami, the death god.

The series is styled after European Industrial Revolution in a fictional setting, one that centers on alchemy as the most advance technology known to man.

It follows the lives of 2 brothers, Edward and Alphonse Elric.

The series evolves on the adventures of a time-traveling high school girl, a half-demon, a monk, a fox demon, a demon slayer, and a nekomata (cat monster in Japanese folklore) as they seek to find the fragments of the Jewel of Four souls to keep them out of the hands of evildoers during the Sengoku period.

• Bleach anime figures – based on the Japanese shÅnen manga series by Tite Kubo.

Bleach tells the life of Ichigo Kuosaki as he accidentally obtains the power of a Soul Reaper, forcing him to take on the duties of defending humans from evil spirits and guiding departed souls to the afterlife.

• Naruto anime figures – based on an ongoing Japanese manga series by Maashi Kishimoto.

It narrates the adventures of an adolescent ninja who aspires of becoming a Hokage (a ninja in his village acknowledged as the leader and strongest of all).

• Dragon ball Z anime figures – based on a Japanese manga by Akira Toriyama.

The series follows the life and adventures of Son Goku as he trains in martial arts and explores the world in search of the 7 mystical Dragon Balls that can summon a wish granting dragon.

• Pokémon anime figures – based on the media franchise published and owned by the video-game company Nintendo.

Created by Satoshi Tajiri, Pokémon is the second most successful video game based franchise in the world.

• Code Geass anime figures – based on the Japanese anime series created by Sunrise, directed by Goro Taniguchi, written by Ichiro Okoucho, and designed by Clamp.

• Final Fantasy anime figures – based on the media franchise created by Hironobu Sakaguchi, owned and developed by Square Enix (Squaresoft) which premiered in Japan in 1987.

The story plot centers on a group of heroes battling great evil and at the same time struggling with their own personal relationships.

• Neon Genesis Evangelion anime figures – based on an anime and manga series written by Yoshiyuki Sadamoto.

The story revolves around the efforts of Nerv (paramilitary organization) to fight monstrous beings called Angels.

• One Piece anime figures – based on the long running shonen manga by Eiichiro Oda. The series follows the adventures of a 17-year old Monkey D. Luffy who gained supernatural abilities by eating a magical fruit.

His greatest ambition is to obtain the world’s most ultimate treasure, One Piece and become the next Pirate King.