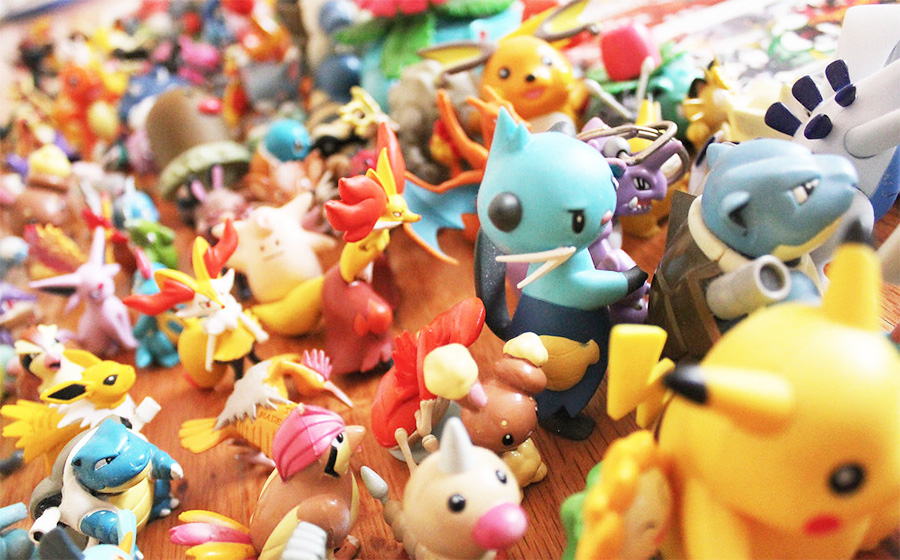 A comprehensive guide to start and improve your Pokemon figures collection

The term Pokémon is a contraction to the Japanese brand Pocket Monsters. It refers to both the Pokémon franchise itself and to the 493 fictional species that made appearances in its media.

The Pokémon prompt and slogan “catch ‘em all” contributed to the craze of the Pokémon figures collectors and fans.

Pokémon burst into the American cultural scene with so much ferocity that it quickly evolved into a major franchise. It included comics, television series, trading cards, online game, action figures, and many others.

The frenzy of collecting Pokémon action figures was most intense in the later part of 1900s and continues up to this day. It reached cultural phenomenon status as it hit the collectible market with an impressive response from fans, action figure collectors and anime enthusiasts.

To help you improve and boost the value of your Pokémon figures collection, we provide you a list of the rare and most sought after Pokémon figurines you should not miss.

Also known as “The Original One”. It takes the form of a horse that is somewhat similar to a Qilin or a Centaur. Arceus is multifarious (can change forms thru the use of special plates) and feeds off the energy of elemental plates.

Final form of Charmander. It has wings and can fly, unlike its previous forms. Charizard is a dragon-like Pokémon that uses a variety of fire-type moves.

Known as the mascot of the Pokémon franchise. Pikachu is a short, chubby, ground-dwelling rodent with Electric abilities. They have acute sense of hearing, and can understand human speech.

Famous for its ability to learn every Technical machine and Hidden machine moves (Pokémon techniques). Mew is unique amongst all known Pokémon. It is very curious and intelligent, loves playing and swimming, very childish and is attracted to lullabies.

One of the first Pokémon created by science with the intent of making it the strongest specie. It is genderless and is a famous legendary Pokémon.

Is Bulbasaur’s final form. It has the ability to manipulate nature, lives in plains, forest, and jungles where there is access to large amounts of sunshine and fresh water.

Bellsprout’s final form. Victreebel lures prey by using sweet smelling scents in its mouth, clamps them down and traps it. They are highly territorial and lives in forests and tropical jungles.

Evolves from Oddish. Its well known ability is launching horrid smelling pollen that can knock out other people and Pokémon.

One of Oddish’s final forms. It scatters toxic spores and toxic pollens that can cause allergy attacks. Vileplume’s natural habitat is on grassy plains, tropical areas, jungles and swamps where there the ground is rich in nutrients.

Is a special evolution from Nincanda. Shedinja resembles an insect’s exoskeleton and is genderless Pokémon specie. It is wise and intelligent, quiet and stealthy like a ninja.

An insectoid creature that evolves from Paras. Sunlight and dry air can hurt its skin so Parasect mostly live in caves.

The final form of Cyndiquil. It has several sharp canine teeth which suggest a carnivorous diet. Typhlosion’s natural habitat is along mountainside and heated grasslands.

Is an orange reptilian Pokémon that resembles a bipedal salamander with dinosaur qualities.

Charmander has the special ability to breathe fire type attacks. It can be found in extremely hot areas, volcanoes, craggy mountains, and rocky heated caves.

Evolves from Charmander. Breathes a much hotter fire than Charmender, more stubborn, bad-tempered and hot headed.

Is not known to evolve into or from any other specie. It is small and tortoise-like and is usually calm if left undisturbed. Torkoal mostly feeds on coal.

Evolves from Growlithe. It resembles the mythical Ryukyuan (cross between a lion & a dog) sporting a canine-like Pokémon.

Is the final form of Whimsur. It is extremely loud specie capable of triggering earthquakes with the tremors made by raising or bellowing its voice.

The first artificial Pokémon (created either through experiments or indirect means). It is genderless and does not need to eat.

Its ability and color change allows Kecleon to become any type, depending on the moves against it. This greenish reptilian Pokémon is not known to evolve from any other specie.

Spends majority of its time sleeping, survives on stored fat, and awakens only once a month to find more food. Snorlax can achieve supreme strength and ability when properly trained and exercised.

Is kangaroo like with vague therapod features (type of dinosaur). It is female only specie. Kangaskhan can mostly be found in jungle-like areas.

Totodile’s final form. They are bipedal crocodilian Pokémon with a big and bulky physique. It is extremely wild and lives near water which explains why Feraligatr is more used to swimming than to walk in land.

One of the 3 starter Pokémon along with Bulbasaur and Charmander. It is a bipedal turtle that can spray water from its mouth. Squirtle can be found on secluded islands, ocean, rivers and deep canyons, small freshwater ponds and lakes.

Haunter – (Ghost / poison Pokémon) evolves from Gastly. It is ghost-like Pokémon with a purple and roundish body. It lives in very dark places, in graveyards and abandoned caves where they plot to take the life of the next victim that comes near.

Dugtrio – (Ground-type Pokémon) evolves from Diglett. They are three Digletts huddled together but what they look underground is uncertain. They live in tunnels and caves under the earth.

Meganium – (Grass-type Pokémon) appears to be very benevolent and gentle specie of Pokémon. It is Chikorita’s final form.

Metagross – (Dual-type steel/psychic pseudo-legendary Pokémon) Beldum’s final form. It is genderless with an extraordinarily high intelligence. Metagross is a brutal predator that lives in mountainous areas.

Absol – (Dark-type Pokémon) is not known to evolve into or from any other specie. Absol can predict occurrences of natural disasters and warns people when one is approaching. It lives in mountainous regions far away from people.

• Regirock – (Rock-type legendary Pokémon) is one of the 3 legendary golems of Hoenn along with Regice and Registeel. Regirock is genderless and is a large golem made of rocks. This Pokémon has no sign of a brain or heart.

• Registeel – (steel-type legendary Pokémon) is a genderless and has a body made up of steel. It is incredibly sturdy that nothing can even scratch it. The metal appears durable and stiff but is surprisingly flexible.

3. Buy only from reputable Pokémon figures sellers. Do not hesitate to inquire if there is any need to clarify matters concerning your purchase.

4. Refer to price guides and other related references for a more or less approximate value of the Pokémon figure you plan on buying.

5. Be aware of warrantees, guarantees, seller policies, terms and conditions. These documents support the authenticity of your purchase.

Where to buy Pokémon figures

2. Pokémon figures from collectors – a number of Pokémon collectors post their Pokémon collections online. If you choose to buy from them, make sure to first check the seller’s reputation and feedback from previous buyers.

Primarily, collectors acquire them for later profit and the best way preserve its valuable state is to present your Pokémon action figures in its best possible condition.

• Avoid too much handling of the Pokémon action figure

Use as little as direct contact to your action figure as possible.

Our hands and fingers have lots of natural grease and oil that could harm the action figures. It causes the figure to yellow and spot if handled too often.

Store your Pokemon figures in cool, dry places away from these following factors:

Direct sunlight – store your Pokémon figures where it cannot be reached by direct sunlight as it causes the material to fade and blotch.

Humidity – too much moisture in the air can cause an action figures paint to peel off and chip.

Dirt and Dust – leads to grime build up and discoloration, creating an unpleasant display.

Place your Pokémon figures in tightly sealed containers and boxes, or in averaged-temperature storage rooms if not in use or not displayed.

Pokémon was created by Satoshi Tajiri along with his company Game Freak Inc. and was released in Japan in February 1996 after six years of development.

Originally developed as a Game Boy game, Pokémon’s concept was inspired by Tajiri’s childhood hobby of collecting bugs and his imagination of them fighting among each other.

Its genre is categorized as an RPG (Role Playing Game) with 3 main goals:

1. Collect all Pokémon species.
2. Train the Pokémon for battle and defeat the elite trainers.
3. Solve small puzzles and defeat minor trainers to complete circuit of the game’s geography.

Pokémon is the second most successful and popular video game-based media franchise in the word, after Nintendo’s Mario series.