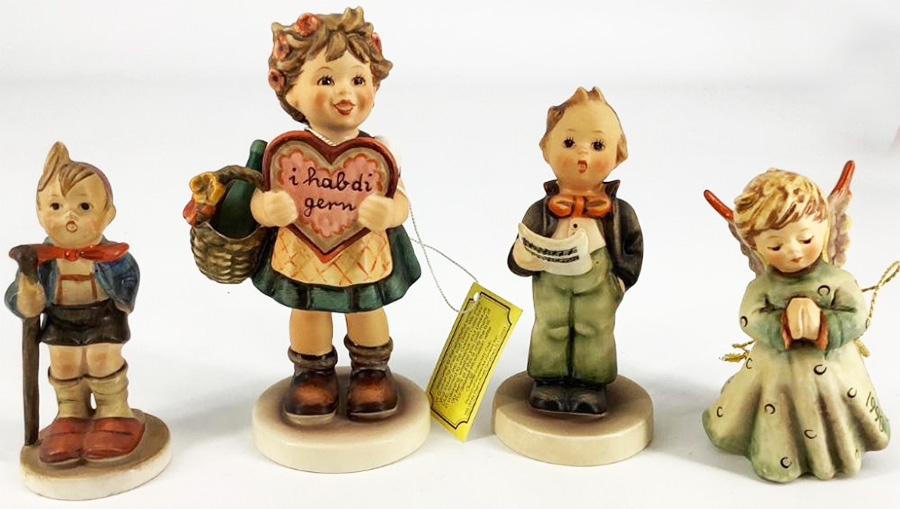 Hummel figurines have become classic investment pieces that can be passed on from one generation of figurine collectors to another.

Through the years, the sweet smiles of the Hummel porcelain figures have gained a strong following from collectors all over the world.

The Hummel figurines were launched in a suitable moment in German history during the post-World War I years. In 1935, at the dawn of another World War, the release of the whimsical Hummels in Germany’s porcelain market provided a great contrast to the nation’s dismal political condition.

The hearts of collectors were instantly captured by the figurine’s warm colors and innocent faces of children based on the sketches of Sister Maria Innosencia Hummel (whose real name was Berta Hummel) of the Convent of Siessen.

The little porcelain figures are exclusively made by Goebel Porzellanfabrik, a ceramic company based in Munich. The extensive line of the Hummel figuren includes the Disney Hummel figurines.

How can I start collecting Hummel figurines?

Chances are, you already have a Hummel piece and you want to invest in more. Or perhaps, you saw a beautiful Hummel figurine somewhere and you also want your very own.

Either which, Hummel figurines are now easier to find thanks to the growing number of dealers and reference books dedicated to Hummel figurine collecting. Newer Hummel figuren pieces can be acquired online in the M.I. Hummel website. There are also Hummels for sale from authorized figurine dealers.

Before purchasing a Hummel, it is wise to browse through the Hummel figurines price list and catalog so that you can have a background of what you are buying.

You can also score previously-owned antique Hummels in secondary markets. However, always be wary of fake dealers and M.I. Hummel imitations.

How can I tell the age and the authenticity of my Hummel figurines?
Look for the “M.I. Hummel” initials and the trademark at the bottom of the figurine.

Under the agreement of Franz Goebel and Sister Maria Innocentia (Berta) Hummel together with the nuns of the Convent of Siessen, each Hummel figurine should bear the signature of “M.I. Hummel”. Decades after Sister Hummel’s death, Goebel still uses the signature in every piece in the Hummel line.

Aside from the signature, M.I. or Berta Hummel figurines have marks of authenticity that serve as a collector reference for the year the piece was made.

Are there rare Hummels, too?

Yes. Like other figurine collectibles, the Hummel figurines also have rarities. Some of the rare Hummel porcelain miniatures and their corresponding 2009 values are the following:

Each Goebel artist has his own rendition to Sister Hummel’s illustrations. These stylistic changes lend minor variations to the original Hummel figurine mold which is identified through its Hum number.

There are some variations that stand out from the rest because of they were produced in limited quantities. Some of their rare stylistic variations are:

There are circumstances when a mistake slips out of the strict quality control of the Goebel factory. When this happens, the mistake is taken as a rare variation and it costs more than the regular Hummel figurines.

Many designs of the Hummel figurines were made in varying sizes and some of the variations are rare because they were made for a limited time.

At some point in production, there were Hummel figurines with religious motifs. These special figurines were painted in white after their glazing process and were imported to Belgium until the mid-1960s.

These retired Hummels (figurines pulled out from production), cost twice the price of the painted pieces.

There were Hummel prototypes that were never put into mass production. However, some of these antique Hummel specimens found their way to the collector’s secondary market.

These rare Hummels rank among the most valuable Goebel figurines.

1940, International Figurines, worth $10, 000 – Hummel figurines wearing costumes of other countries

How can I determine my Hummel figurines value?
The best and perhaps the most reliable way to determine the value of your antique Hummels is by sending it to a certified appraiser.

Aside from the rarity, true-blue Hummel collectors know there are other factors that influence the Hummel figurine appraisal.

• Trademarks – you’ve read about it earlier how the trademark indicates the era your antique Hummel piece was made. There are about eight Hummel trademarks. However, the age of your Goebel Hummel figurine is not an over- all indicator of its value.

• Condition – a crack, chip, crazing (hairline cracks), discoloration, or a broken piece – no matter how small – can devalue your Hummel. Appraisers can always detect if a broken Hummel was repaired to cover a damage.

How can I care for my antique Hummels?

Over time, your Hummel porcelain piece may have gathered dust. However, hapless cleaning might be damaging to your Hummels. In caring for your valuable Hummel figurines, remember:

Most Hummel figuren pieces are made from unglazed porcelain thus, they absorb moisture. The primary cause of discoloration of the Hummel figurines is moisture retention.

Should you wash your Hummel, cover the air holes (these are the tiny holes in the figurine to let out air during baking), so water can not get inside the hollow interior.

Another cause of discoloration is direct sunlight. Display your old Hummel figurines in a cool dry place and avoid drastic temperature changes to avoid crazing.

Store your Hummels inside their original boxes or in cartons lined with bubble wrap. Never wrap you Hummel figurines with sheets of newspaper because the ink will stain the porcelain’s finish.

Is there a Hummel collectors club that I can join?

Yes, there is a special club dedicated to Hummel figurine aficionados. Originally called as the Goebel Collector’s Club in 1976, it was later on renamed M.I. Hummel Club in 1989.

For a minimum membership fee, M.I. Hummel club members get to have their own exclusive edition Hummel figurines and quarterly newsletters.

The MI Hummel Club is a good venue for Hummel collectors to socialize, discuss Hummel figures value, and most of all, trade Hummels.