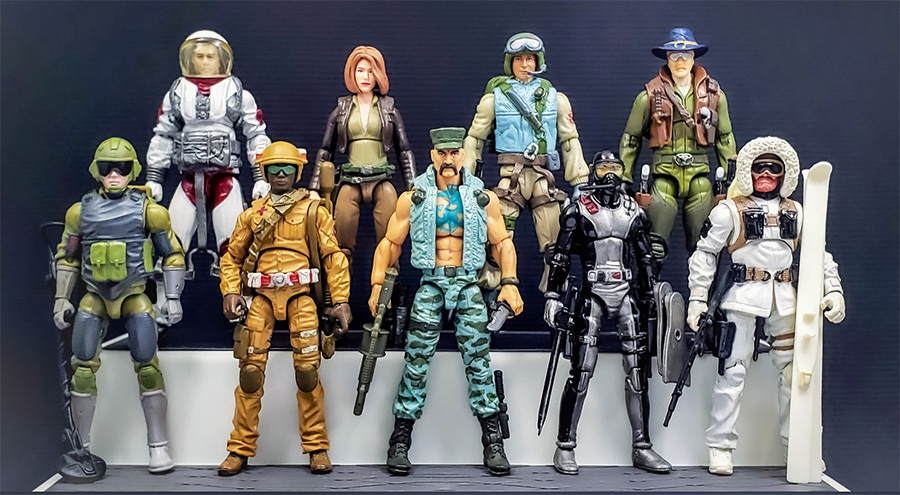 Know more on how to collect, buy, and take care of your G.I. Joe action figures

G.I Joe action figures are military themed figurines that have fueled the imagination of many kids. The abundance of GI Joe figures, vehicles, and play sets available allowed the creation of many exciting adventures.

Coining the term “action figure”, GI Joe captured a special favor among many collectors. It created an entire division of toys which led to GI Joe action figures collecting.

G.I. Joe started as a comic strip for the military in 1942 (during WWII). In 1964, Hasbro toy company created GI Joe a line of action figures initially designed to represent the 4 branches of the US Armed Forces – Action Soldier (Army), Action Sailor (Navy), Action Pilot (Air Force), and the Action Marine (Marines).

The term G.I. stands for Government Issue that became the generic term for US soldiers, particularly for ground forces.

The G.I. Joe trademark has been used by Hasbro to brand 2 different toy lines:

1. The original 12-inch G.I. Joe action figure line that began in 1964 centered on realistic action figures. They were known in UK as Action Man.

– In 1982, the line was re-launched in a 3 ¾ – inch scale complete with vehicles and play sets. Action Man was later on changed and renamed Action Force but used the same molds as the previous GI Joe figures.

G.I. Joe action figures were launched as a line of manipulable figurines with the “guy doll” concept. However, they were never called dolls but rather developed and used the term “action figure”.

A chief element that draws considerable interest to the GI Joe figure was its articulation. Twenty one moveable joints enabled the action figure to pose in several combat positions.

The fans positive response and increasing demand fueled the manufacturing and release of several G.I. Joe action figures toy lines. You will find that most GI Joe figure collectors have been acquiring them since childhood and just continued throughout the years.

A timeline on the release of different G.I. Joe action figures

Earlier releases of GI Joe figurines are the classic pieces most sought after by collectors. Classic GI Joe figures can boost the value of any collection. They can be mostly found in the piles of collectors who have been collecting GI Joe figures since childhood.

• 1967 – Talking G.I. Joe action figures were introduced. The first female G.I. Joe figure, the Action Nurse was also released (ill-fated and was withdrawn from production making it one of the rarest GI Joe figure).

• 1969 – action figures of the Air Force, Navy, Marines, and several other military organizations around the world were entered into the toy line.

• 1976 – Eagle Eye, Bulletman (1st superhuman team member), and The Intruders (a group of aliens) was introduced.

2001 – a Hispanic GI Joe action figure was introduced in the line along with a special four G.I. Joe figures series to commemorate Pearl Harbor’s 60th Anniversary.

• GI Joe Sigma 6 action figures (2005) – a re-imagining of the 1980s GI Joe: A Real American Hero toyline. Most of the Sigma 6 figures stands approximately 8 inches (200mm) and have more articulation.

• 25th Anniversary (2007 – 2009) – Hasbro released a 25th Anniversary collection to commemorate the 25th anniversary of the GI Joe Real American Hero line. The newly sculpted 100mm figures are based on classic and new designs of many of the lines best known and most popular characters.

Pursuit of the Cobra line includes figures and vehicles that were not shown in the movie. Some of them may have been scheduled for the 25th Anniversary release that was cancelled.

• Know what GI Joe figure to purchase – refer to the timeline above for the list of GI Joe figurines produced. The year will give you the idea if a particular figure is vintage or new and what GI Joe toy line it belongs to.

If you aim to complete your GI Joe collection, follow the list. Acquire the ones that are not yet in your pile.

• Check the GI Joe action figure’s condition – look for any sign of defects such as paint chips, discoloration, malformed and broken parts, and missing accessories.

The lack and presence of any wear and tear in your GI Joe figures affects its price and value.

Ask for guarantees and warrantees; clarify the terms and conditions of your purchase. Clearly settle payment matters especially for transactions made online.

G.I. Joe figures on online action figures shop and stores such as:

http://www.hasbro.com/gijoe/en_US/ – the official site of GI Joe action figurines, vehicles, and playsets. Browse their shop for a huge selection of GI Joe figures for sale.

• Malls, specialty and collectible shops, yard sales – these are other places and venues where you can also find and acquire your GI Joe figurines.

Maintaining your GI Joe action figures is easy. It only requires your time and effort to help your GI Joe figures collection last longer and keep their collectible value.

Just like any other collectible, action figures too are susceptible to environmental factors and aging. Follow these steps on how to care G.I. Joe figurines, making them look just like new.

1. Keep your GI Joe action figures away from these harmful factors:

• Direct sunlight – too much sunlight causes the material to fade and blotch.

• Heat – intense heat, together with sunlight causes the plastic to soften and misshape.

• Humidity – high humidity causes the paint on your GI Joe figure to peel and chip. It also causes decals to fall off and the joints to loosen making it hard for the figures to maintain their original postures.

• Dirt and dust – our fingers have natural oils that are harmful to action figures when handled too much. Along with dust and dirt, they cause grime buildup that creates an unpleasant display.

2. When your GI Joe figures are on display, place them in an area where there is limited and indirect sunlight.

3. In storing your G.I. Joe action figures, keep them in tightly sealed boxes or on sturdy plastic storage containers to help keep out excess humidity.

4. Clean your collectible GI Joe figures once in a while. Most of the figures can be soaked in soapy water then gently scrub with a soft bristled brush. If their materials do not allow it, you can simply wipe them gently with a clean cloth.