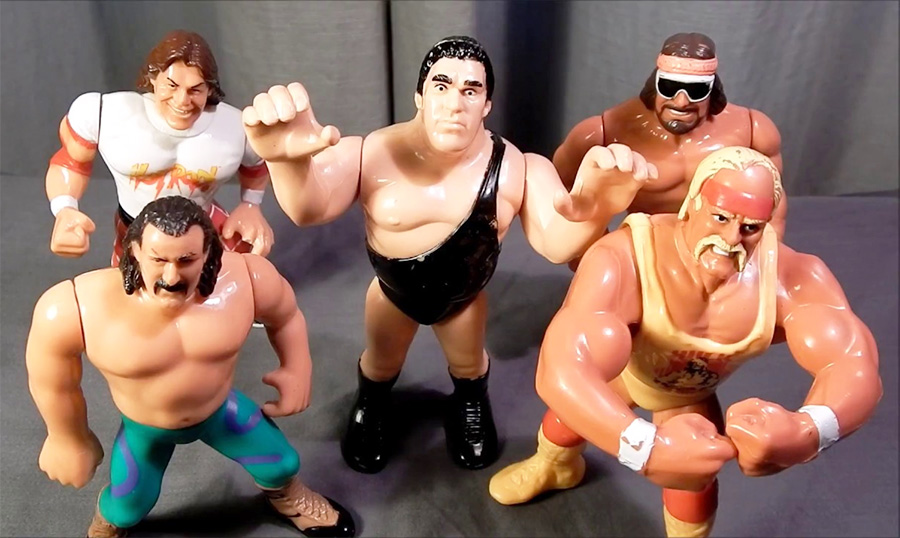 Are you a huge wrestling fan and want to start your own wrestling action figures collection? Or are you struggling to improve your WWE figurines pile?

Follow this collecting guide to further revamp your WWF and WWE figurines collection. Read on and learn informative tips on what, how, when, and where to hunt for those wrestling action figures.

What is wrestling?
Wrestling is one of oldest forms of martial arts which date back in the 13th or 12th century recounting the Trojan War. It is an ancient form of martial arts that uses clasp type techniques, for instance, joint locks, takedowns, clinch fighting, throws, and other grappling holds.

Wrestling is a physical competition with a wide range of varying rules both traditional historic and modern styles. The match is generally between two people attempting to maintain superiority over his / her opponent.

A perfect example of professional wrestling is World Wrestling Entertainment, Inc., commonly referred to as WWE. It is a publicly-traded and privately-controlled integrated media and sports entertainment company majority owned by Vince McMahon who is also an altogether chairman and CEO.

1980 saw WWE’s rise to fame. Because of the show’s popularity the demand for collectibles, memorabilia, and action figures started to clamor. In that same year WWE contracted LJN (American toy company and video game publisher) to produce the first wrestling action figures which debuted in 1984.

The first WWE action figures were poised at 8” tall and made of solid rubber but were not articulated (no points of articulation). To make up for this lapse, the wrestling figurines were very accurate and looked exactly like their real life wrestler counterparts.

Hasbro (US based multinational toy and board game company) snagged the WWE contract after LJN closed its toy division. They produced WWE action figures from 1990 until 1994. Their wrestling toys were made of plastic and had little articulation and an assortment of spring-loaded features.

WWE toys once again changed manufacturers and its production was passed on Jakks Pacific Corp. in 1996 until December 2009. Mattel will take over the production hence forward.

World Wide Fund (also goes by the acronym of WWF), an environmental organization sued Word Wrestling Federation in 2000 for violating a 1994 agreement that limits WWF’s use of its initials overseas for merchandising. A day after the charge, WWF was changed to WWE.

Wrestling is very popular among kids and even grown-ups, idolizing the likes of Hulk Hogan, Rowdy Roddy Piper, Triple H, Batista, Stone Cold Steve Austin, and John Cena. Capitalizing on this sense, WWF created a line of action figures representing every one of their professional wrestlers, the wrestling ring and other items to go with it.

WWE toys and action figures were marketed by major toy companies and have been distributing since the late 1980’s. Chief toy makers that released WWF and WWE action figures are LJN, Hasbro, Jakks Pacific, and Mattel.

Wrestling fans sure do enjoy collecting wrestling action figures and other memorabilia that associates to their favorite superstar. Among all WWE memorabilia, the action figures rank the most, why so? Because these collectibles carry the resemblance of a wrestling superstar fans are so crazed about.

LJN (Lewis J. Norman) acquired the first license to produce WWF action figures that ran from 1984 till 1989. The toys were made of solid rubber and had an almost accurate resemblance to their real life counterparts. The figures however did not possess any points of articulation.

Their line of wrestling toys was produced under the title of Wrestling Superstars which was cancelled in 1989 when LJN closed its toy division.

LJN’s most successful series from the line was their original 8” WWF figures that expanded onto other versions such as Bendies and Thumb Wrestlers.

Wrestling Superstars that were featured in their 8” line came with a unique biography card on the packaging and a small poster.

Succeeding LJN’s Wrestling Superstars, Hasbro bagged the line when it was cancelled from production in 1989. The WWF Hasbro Action Figure line were made of plastic and came posed in their signature action move.

Unfortunately their figures were critiqued as too “cartoonish” which does not exactly justify the highly acclaimed wrestling superstars.

Even so, the line became popular partly due to WWE’s fame in general, plus the fact that it was released at a time when wrestling action figures are becoming priced collectibles.

Included in Hasbro WWF action figure line are other expanded versions such as wrestling rings and mini wrestlers’ figurines.

Jakks Pacific took over WWE’s action figure license in 1996. The company designs and markets a broad range of toys and action figures in high attributes. For their WWE toys, they presented it in a manner of creating a specific genre for the figures making WWE figurines mature products worthy to collect.

• Likeness – there’s no point in not making the action figures look like their live counterparts. It’s one of the main reasons why collectors buy them.

• Sculpt – Jakks opted for a consolidated sculpts structure. They reused 85% of their figure’s bodies.

• Paint – paint jobs by Jakks are clean and precise.

• Scale – the figures are scaled between 6 and 7 inches

• Stability – the WWE figures are very stable, they will not fall because of their exact foot sculpt (this goes for all action figures).

• Plastic – sturdy plastic for the figures overall physique, arms and heads are in softer construction and the chests are thin hollow stock.

• Props – solid props that comes to accessorize the WWE toys.

• Packaging – each figure comes in a blister card.

Jakks Pacific’s license to produce the WWE action figures ends in December 2009 and Mattel will be taking over. Mattel’s focus points on their upcoming WWE action figures are better accuracy, significant depth, and further improvement on the Superstar scale.

Mattel’s line will be targeted towards kids, ring play sets, and championship belts from all 3 WWE brands which collectively creates collector worthy WWE wrestling action figures. Their WWE package will include Basic and Elite figures.

Mattel firmly commits to satisfying both the WWE action figure collectors and the younger wrestling fans that are just starting on their own WWE collections.

Tips on how to collect wrestling action figures

Reasons for collecting toy and figurines and collecting in general vary upon the collector’s choice and passion. Wrestling fans love to collect WWE and WWF wrestling action figures because of their life-like features that are almost similar to their live equivalents.

2.) Identify the vintage and rare figurines

– once you have a more or less complete collection of the recent WWF and WWE figurines, check sites and checklist so you know what important items you have missed. For instance, old wrestlers will never have new version of their action figures, so trace back time and hunt for those vintage and rare wrestling figures that are very important in boosting your collection’s worth and value.

3.) Know what, where, and when to buy wrestling action figures

– be a wise collector but an even wiser buyer. Before rushing to the mall, know what figure or figures are you going to purchase so you won’t get off track and be carried away on your WWE toys shopping. Check for sales and updates for a chance to buy cheap yet awesome wrestling figures. Search the net for WWE figures that are also listed on sale with marked down prices.

4.) Collect and invest for later profit

– for WWE collectors who mix hobby with business, it is advisable to purchase 2 action figures of a favorite wrestling action figure. One would be either for play and display and therefore can be taken out of the box, the other one would kept in mint condition for later profit and greater worth and value.

Rare and vintage wrestling action figures are obviously the ones produced earlier under LJN’s and Hasbro’s WWF action figures line. These wrestling figurines are now worth double their original prices which were reasonably cheap when they first hit toy stands despite wrestling’s rising fame back then.

For serious wrestling action figures collectors acquiring the vintage ones surely do bring charisma to their respective collections plus it adds value. Some of those vintages WWF action figures are:

• Andre The Giant (LJN) – no kids (back then) collection will ever be complete without the biggest and fattest, in short, giant wrestling superstar. His action figure was quite in great shape with really well-rounded and fatty arms. Two versions were made, one with a short hair and the other has it long.

• The Undertaker (Hasbro) – Undertaker is a prominent figure in both the WWF and WWE times, his figure came with his signature hat and outfit.

• Ultimate Warrior (Hasbro) – version 3 of Ultimate warrior had the most resemblance of him but his boots was a drawback, it looked weird and looked like the one that 80’s pop stars wore.

• Honky Tonk Man (LJN) – his figure proudly displayed on of his infamous $15,000 jumpsuits

• Hulk Hogan (Hasbro) – no early 90’s list of wrestling figures will ever be complete without Hulk Hogan in it. He is one of the most idolized wrestler and so does his action figure is most demanded. Hasbro’s 1st version of his figure had his most likeness.

• The Iron Shiek – his action figure was hard to resist due to his spiked boots, making him seem almost invincible.