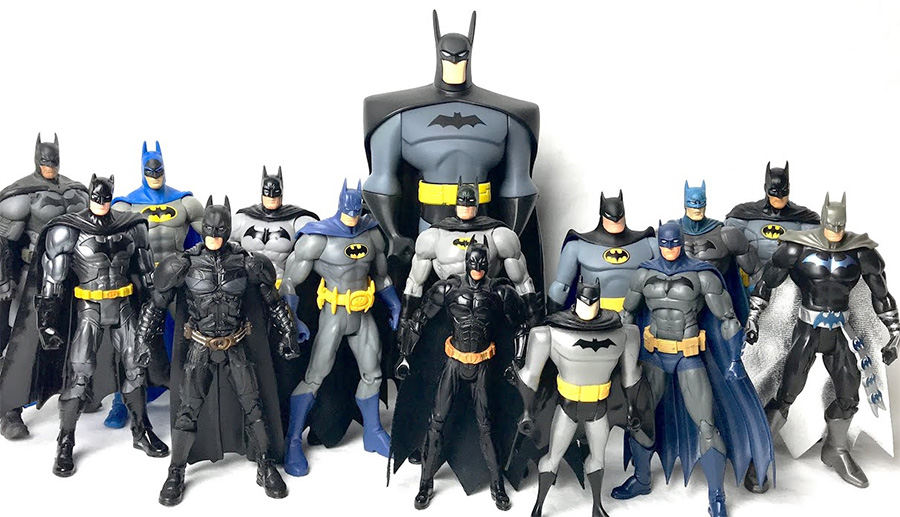 Batman is a fictional character and a comic book superhero created by artist Bob Kane and writer Bill Finger.

He is also referred to as “the Bat-Man, “the Caped Crusader”, “the Dark Knight” or simply “the Bat” which first appeared in the pages of DC Comics (Detective Comics) #27 in May 1939.

The Bat’s popularity swelled in 1940 soon after his introduction which progressed onto having his own comic book title.

Batman action figures were also produced in the 1940’s. Batman’s character has been embodied in comic books, animated series, films and other media. Action figures of Batman had more figures produced in his likeness than nearly any other fictional character in existence.

The first Batman figurines was released by early and mid 1940’s with only the action figures of Robin and Batman himself, they served as carnival prices given at local fairs.

In 1960, Marx Company produced the first ever pose-able Batman action figures standing at 4” tall which came with an assemblage of accessories including handcuffs and a fire extinguisher among others. Only a few of these still exists and are highly valued by Batman toy collectors.

The figures featured were dressed in cloth; the latter however produced the figures that the costumes came with it and is not sold separately.

Mego made a fatal mistake in not securing the license to produce action figures in which Kenner had scooped up. Following the success of the star wars figures line, DC comics characters that includes the Batman toys adapted the standard marks of the former lines they produced.

What started in the comics, expanded to a tv series and was later on made into a movie. Batman movies received optimistic demand from fans and thus the need for action figures too surge with great wanton.

The bat’s character first appeared in DC comics in 1939. Several toy lines based on the comic individuals were produced.

Legends of Batman – released by Kenner in 1994, the figures were made from new sculpts and featured true to comic versions of some Batman characters. The line never gained popularity and was called off soon after its debut.

Legends of the Dark Knight – the line is based on the popular comic of the same name which featured all Elseworlds versions of Batman and all the other characters. Like Legends of the Batman line, it too never succeeded.

Batman: Total Justice – produced in 1996, this line also featured all new sculpts of DC comics characters. The line did not only feature Batman action figures but brought in the figures of Robin and the Huntress as well other DC superheroes.

Batman: Knight of the Force Ninjas – 1998, Kenner produced a new line on action figures of Batman featured all new sculpts in an Elseworld theme.

Hasbro’s DC Super Heroes – released by Hasbro, the batman figures included in the line were Masterpiece Batman box set with 1939 Batman figure, Golden Age collection featuring Batman and Robin figurines among others. The villains too were included such as Joker and Penguin action figures.

DC Direct – DC comics decided to produce their own line in order to please the fans. The highly articulated toys included Batman action figures in the line.

Because of many media franchise that adapted batman’s character, he was considered as an already cultural icon. Batman movies promoted his character even more and thus the variety of batman merchandise including the toys and collectibles dominated worldwide market.

Toy lines based on Batman movies:

Batman – Kenner produced a line of Batman action figures in 1990 under the Dark Knight Collection. The line consisted of several version of Batman which are disguisable by their unique accessories and different paint jobs.

Batman returns – following the movie release, Kenner named the line after the film which premiered in 1992. It included versions of the same Batman figure sculpts with the previous collection line. Batman villains such as Penguin and Catwoman were also given action figures of their own.

Batman forever – the movie was released in 1995 and Kenner’s Batman toy line featured Batman Forever figures with the use of an extensive range of fresh sculpt.

Batman and Robin – this is the final Batman film of the 90’s which hit the screens in 1997. Kenner did too release its respective toy line but unlike previous lines, it included more batman villains’ figurines than just the plain heroes.

Batman: The animated series – Kenner produced the line taking the same name from the animated series which premiered in 1992. Again, the most popular figures of Batman and Robin were included as well as the other new villains, Clayface, Scarecrow and Poison Ivy.

Under TAS (the animated series) line were a series of action figures based on batman animated films.

• Batman: Mask of the Phantom

• Batman: Crime Squad which was later renamed as The adventures of Batman and Robin

The new Batman adventures – by this time, Hasbro has brought Kenner and a new line of batman figs based on new animated series was released. New sculpts based on the most recent animated series are included as well as the first Creeper and Mad Hatter figures.

Batman Beyond – based on the WB Batman cartoon: Batman Beyond. The line is a collection of new figures featuring new Batman figurine versions.

A positive quality that contributed to the success of Batman action figures collecting traces back to the appeal of Batman’s character. Adding up to the fact that even the super hero that he is, he does not posses any superpowers but rather relies mainly on his detective skills, wit and reliance to technology in order to hunt down criminals.

Enjoying the brace of major toy licensees producing line after line of Batman action figures, the Caped Crusader has not only retained but grown its popularity among fans.

In collecting batman toys, there are several sides to contemplate. Just like in any other form of action figures collecting, factors such as authenticity, price, and interest must be taken considerably.

Don’t go into a collecting frenzy without proper knowledge of what you’re doing. Primarily, you should know first all Batman characters so you can be aware of the ample figure possibilities you can choose from.

Knowing the characters personalities as well as their roles gives you a wider understanding and a comprehensive reason on which figure to choose and collect. Identify and learn about vintage and rare batman figures to boost your pile.

Make sure to always purchase authentic Batman figurines. Refer to license toy maker sites of batman in order to guarantee a genuine item. Be up to date on any batman toy updates to learn about new additions to your collection.

Let’s not deny that collecting as a hobby is fulfilling and rewarding at the same time, plus it is a discrete form of investment. Interest wavers in time, true! But the value and worth of action figures you have gathered does not.

In fact, the vintage ones are the most expensive and sought after by collectors. And to preserve you batman collection for later profit, make sure to properly maintain them.

Know the factors that affect the toys physically such as direct sunlight, humidity, dust, dirt, and grime build up! Keep your dark night collection away from these hazardous elements and store them in dry clean places.

Clean them once in a while by carefully wiping them off. Store the batman figurines in sturdy containers that is not stacked or piled up too high to avoid damage of the ones below.

Early releases of the Caped Crusaders figurines proved to be rare and vintage thus heavily demanded by collectors who either made a great find or who can afford it.

Obvious vintage Dark Knight pieces are his and robins action figures that were given away in carnivals way back in the 1940’s. Other classic figures of batman are the ones based from ABC series: Batman, these figures are truly priced collector’s item.

The Batman and the Justice League of America Set by Ideal was done in the 1960’s. It was produced along with another set but this one is much rare. Mint conditions of this set are worth thousands, one which has been put in the market at an auction was sold for $7,300.

The 1966 Batman Utility Belt and Play set also by Ideal is considered as the number 1 batman item. Classic toy collectors call it a museum piece. The set is a complete collection of crime fighting equipment for batman’s crime hunting tenacity. A mint condition of this set was auctioned at $16,000.

Some more rare figurines of batman are the Vintage 1989 Batman action figure and Penguin Toy DC Comics, Scarce Bandai UK Batman Motorized Batmobile MIP, and the Original Vintage 1974 Joker Batman Bank among others. All of which are priced collectors item and a must addition to your Caped Crusader’s collection.

As was mentioned, Batman action figures have more figures in his like than any other fictional character. Because of the wide variety of Batman toys that were released, many of which did not thrive, but among them several did win the hearts of the Dark Knights fans and collectors.

Top batman toys do not necessarily mean the same rank with every other collector. But among them are really cool batman figs that appeals to the totality of the Cape Crusaders global aficionados. Chief figures of batman include vintage as well as the new ones.

• Mego Batman (Mego 1973) – first real batman toy ever made and the only batman figure that was modeled after Adam West with a striking likeness.

• Batman returns: Bruce Wayne (Kenner 1992) – the figure sported an accurate likeness of Michael Keaton. The figure is compatible with the movie Batmobile plus it came with a full slate of accessories.

• Hush Batman (DC Direct 2004) – batman statue inspired by the “Hush” comic book story, this figure is must to your batman pile.

• DC Superheroes Batman (Mattel 2007) – the figure dawns a nice balance between articulation and overall look and comes with a decent assortment of accessories.

• Minimate Batman (DC Direct 2008) – pint size batman figure that has the cute charm as the Lego figs but with a higher level of articulation and detail.

• Batman and Son Batman (DC Direct 2008) – the figure is based on Andy Kubert’s character design which is a more subtle features than the actual model.